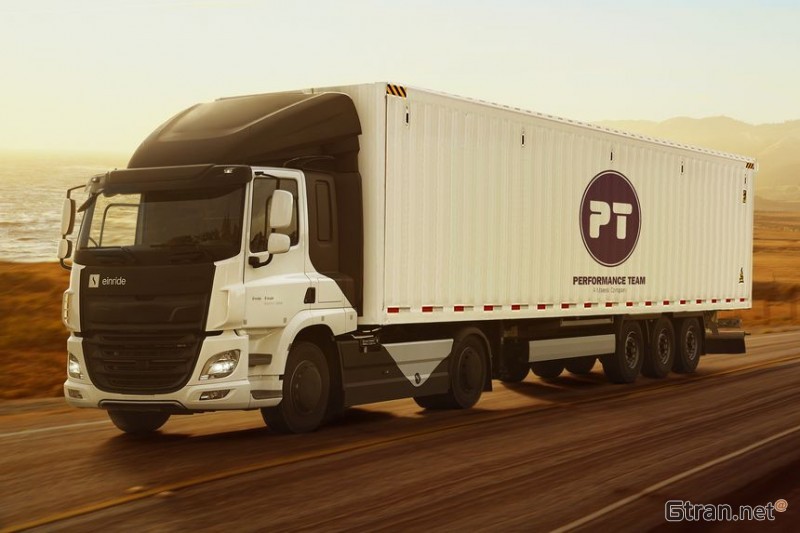 An artist's rendering of an Einride electric truck.

Einride will provide digital and electric freight shipping support and the use of its operating system for the trucks to electrify Maersk’s North American warehousing, distribution and transportation business. The agreement will launch in Los Angeles, Chicago, Newark, N.J., and Savannah, Ga.

Maersk Growth, the company’s venture arm, is an investor in Einride, having participated in a $110 million funding round last year.

The deal comes as Maersk is promising to bring carbon emissions across its global business to net zero by 2040. The work with Einride will help increase capacity and drive the company’s sustainability strategy, said Narin Phol, regional managing director at Maersk North America.

The 300 electric trucks, which both companies claim to be the largest heavy-duty electric truck deployment so far, will be delivered between 2023 and 2025. Maersk isn’t buying the trucks outright but will use the capacity.

Maersk declined to disclose the total cost of the deal.

Maersk Line is the world’s second-largest container line by capacity, according to maritime research group Alphaliner, but it has been resetting its strategy to go beyond ocean freight into inland logistics through a series of acquisitions.

The company in February bought U.S. logistics operator Pilot Freight Services in a $1.68 billion deal in a purchase aimed at bolstering its ability to move big and bulky freight in North America.

Maersk said its long-term goal in North America is to move toward a fully electric trucking fleet.

“If this is a success, there is no reason why we don’t have the same operation across all port cities in the U.S.,” Mr. Phol said.